Decernotinib ... JAK inhibitor for the treatment of autoimmune and inflammatory diseases, including rheumatoid arthritis. 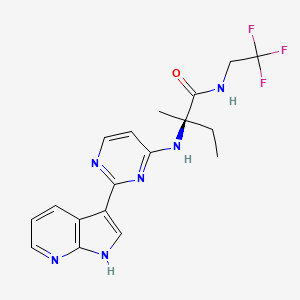 In phase 3  for the treatment of autoimmune and inflammatory diseases, including rheumatoid arthritis. 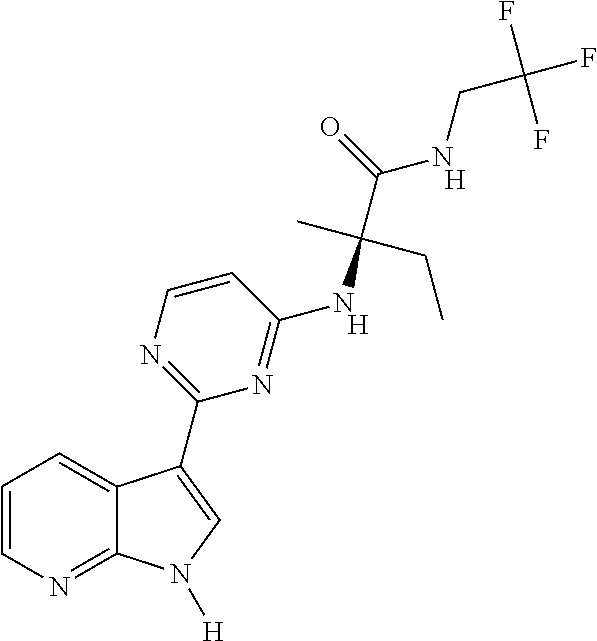 The Janus kinases (JAK) are a family of tyrosine kinases consisting of JAK1, JAK2, JAK3, and TYK2. The JAKs play a critical role in cytokine signaling. The down-stream substrates of the JAK family of kinases include the signal transducer and activator of transcription (STAT) proteins. JAK/STAT signaling has been implicated in the mediation of many abnormal immune responses such as psoriasis. Moreover, JAK kinases represent an established therapeutic target for this disease.
For example, JAK kinases are an established therapeutic target for treating psoriasis. Stump K. L., et al., Arthritis Res. Ther. (201 1) 13:R68; Fridman J.S., et al., J Immunol. (2010) 184:5298-5307; West K., Curr. Op. Investig. Drugs (2009) 10:491-504; Kremer J. M. et al., Arthritis Rheumatism (2009) 60(7):1895- 1905; Xiong, W. et al., Ther Adv Musculoskelet Dis. (201 1) 3(5): 255-266; Panes, J. et al. 19th Ann. Eur. Gastroenterology Week (Oct 22-26, 2011) Stockholm, SE, PI 456; and Drugs in R & D "Tofacitinib" (2010) 10(4):271-84.
Compounds described as kinase inhibitors, particularly the JAK family kinases, are disclosed in WO 2005/095400 and WO 2007/084557. Also disclosed in these publications are processes and intermediates for preparing these compounds
Decernotinib ( VX-509 ) is an oral selective JAK3 inhibitor being evaluated for the treatment of rheumatoid arthritis ( RA ). This was a 24-week, randomized, placebo-controlled, double-blind, phase 2 study of four dosing regimens of Decernotinib, administered to patients with RA with inadequate response to Methotrexate ( MTX ).
The aim of the study was to assess the efficacy and safety of four dosing regimens of VX-509 administered to patients with rheumatoid arthritis on stable background Methotrexate therapy.
Patients with active rheumatoid arthritis ( C-reactive protein [ CRP ] greater than ULN, greater than or equal to 6 swollen joints [ of 66 ], and greater than or equal to 6 tender joints [ of 68 ] ) taking stable doses of MTX were randomized 1:1:1:1:1 to receive placebo or one of four dosing regimens of Decernotinib ( 100 mg QD, 150 mg QD, 200 mg QD, or 100 mg BID ) for a duration of 24 weeks.
The primary efficacy endpoints at week 12 were met and have previously been reported; 24-week efficacy and safety results are now reported.
A total of 358 patients were randomized and received greater than or equal to 1 dose of study drug; 81% of patients were female, with a mean age of 53 years.
At baseline, the mean tender joint count was 23.8, the mean swollen joint count was 16.1, and the average disease duration was 7.3 years.
After 24 weeks of treatment the proportion of patients achieving ACR20, ACR50, ACR70, DAS28 ( CRP ) less than 2.6 and DAS28 ( ESR ) less than 2.6 and the decrease from baseline in DAS28 ( CRP ) were statistically significantly greater in each of the Decernotinib dose groups than in the placebo group.
Over 24 weeks, the percentage of patients with any adverse event was higher in the Decernotinib group ( all Decernotinib dose groups combined ) ( 59.9% ) relative to placebo ( 42.3% ) and led to study discontinuation in 9.1% and 8.5% of patients in the Decernotinib and placebo groups, respectively.
The most common adverse reactions in the Decernotinib group were headache ( 8.7% ), hypercholesterolemia ( 5.2% ), and diarrhea ( 4.5% ).
Serious adverse reactions occurred in similar proportions of patients receiving Decernotinib ( 7.3% ) or placebo ( 5.6% ), but there were more serious infections in the Decernotinib group ( 3.5% ) compared with placebo ( 1.4% ).
Through 24 weeks there were two serious adverse effects that resulted in death; one was cardiac failure in the Decernotinib 100 mg BID group ( previously reported ) and one was pancytopenia in a patient with pneumonia in the Decernotinib 200 mg QD group.
Elevations in transaminase levels and decreases in median neutrophil and lymphocyte counts were observed in the Decernotinib groups and were generally mild.
Safety profiles were comparable across groups receiving Decernotinib.
In conclusion, all tested doses of Decernotinib significantly improved signs and symptoms of rheumatoid arthritis versus placebo when administered in combination with stable background Methotrexate therapy for 24 weeks.
Decernotinib was associated with small increases in adverse reactions rates, serious infections, and mostly minor laboratory abnormalities. ( Xagena )
Source: EULAR Meeting - van Vollenhoven R et al, Ann Rheum Dis 2014;73(Suppl2)
see
WO 2007084557
http://www.google.com/patents/WO2007084557A2?cl=en
.............................................
WO 2013006634
http://www.google.com/patents/WO2013006634A2?cl=en

The present invention provides a process for preparing (R)-2-(2-(lH-pyrrolo[2,3- b]pyridin-3-yl)pyrimidin-4-ylamino)-2-methyl-N-(2,2,2-trifluoroethyl)butanamide of Formula la:

viiib) reacting 2,4-dichloropyrimidine (11a) with a hydrochloride salt of D-isovaline (15a) under coupling condition to generate a compound of Formula 2a 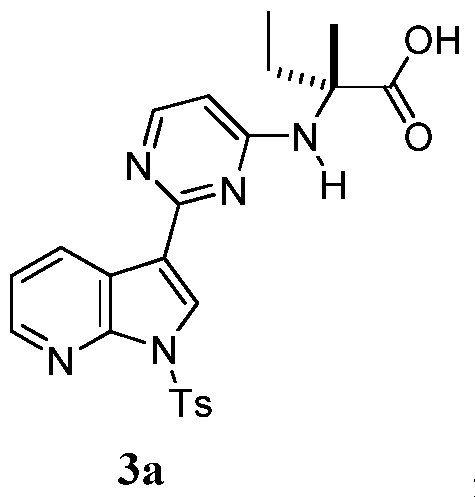 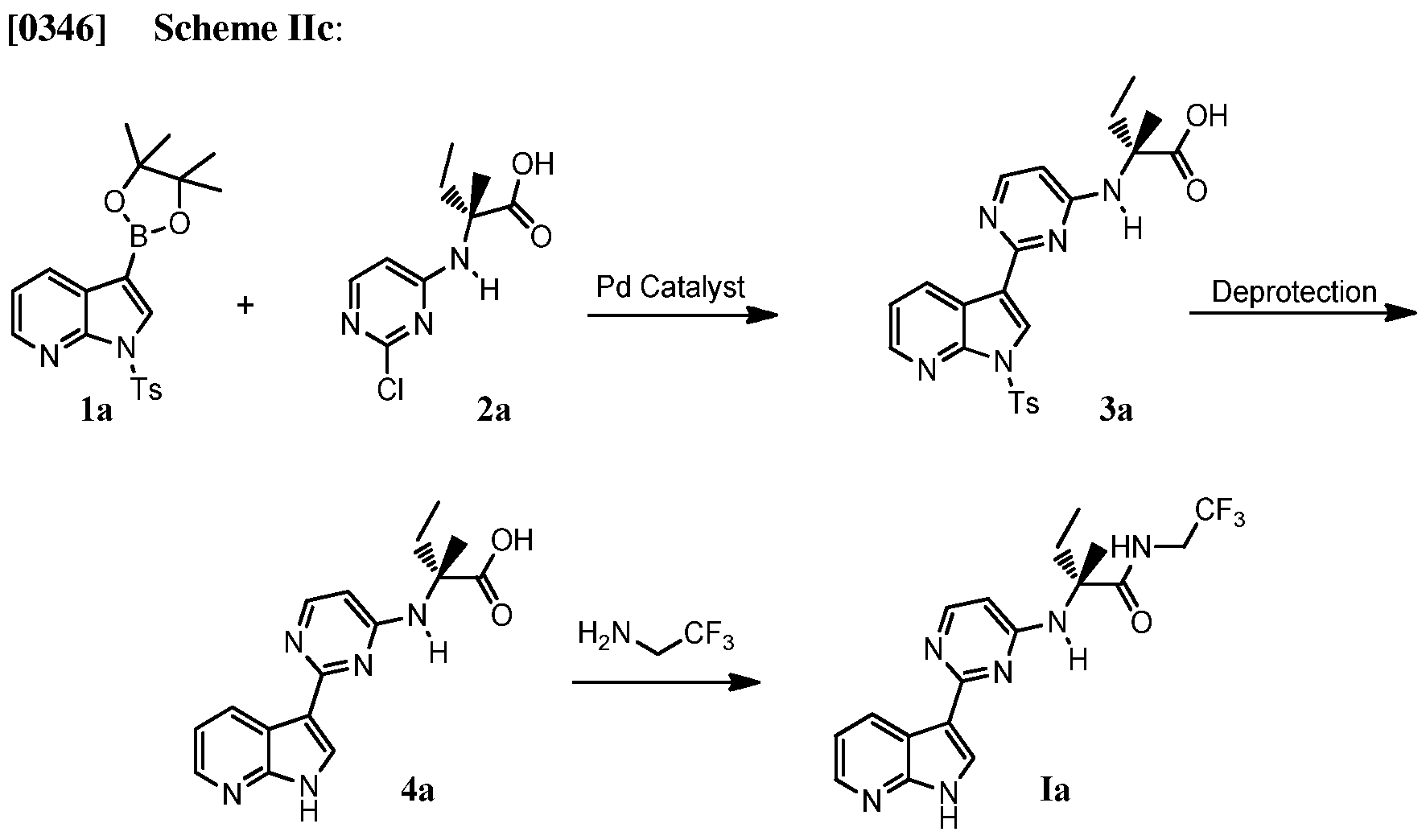 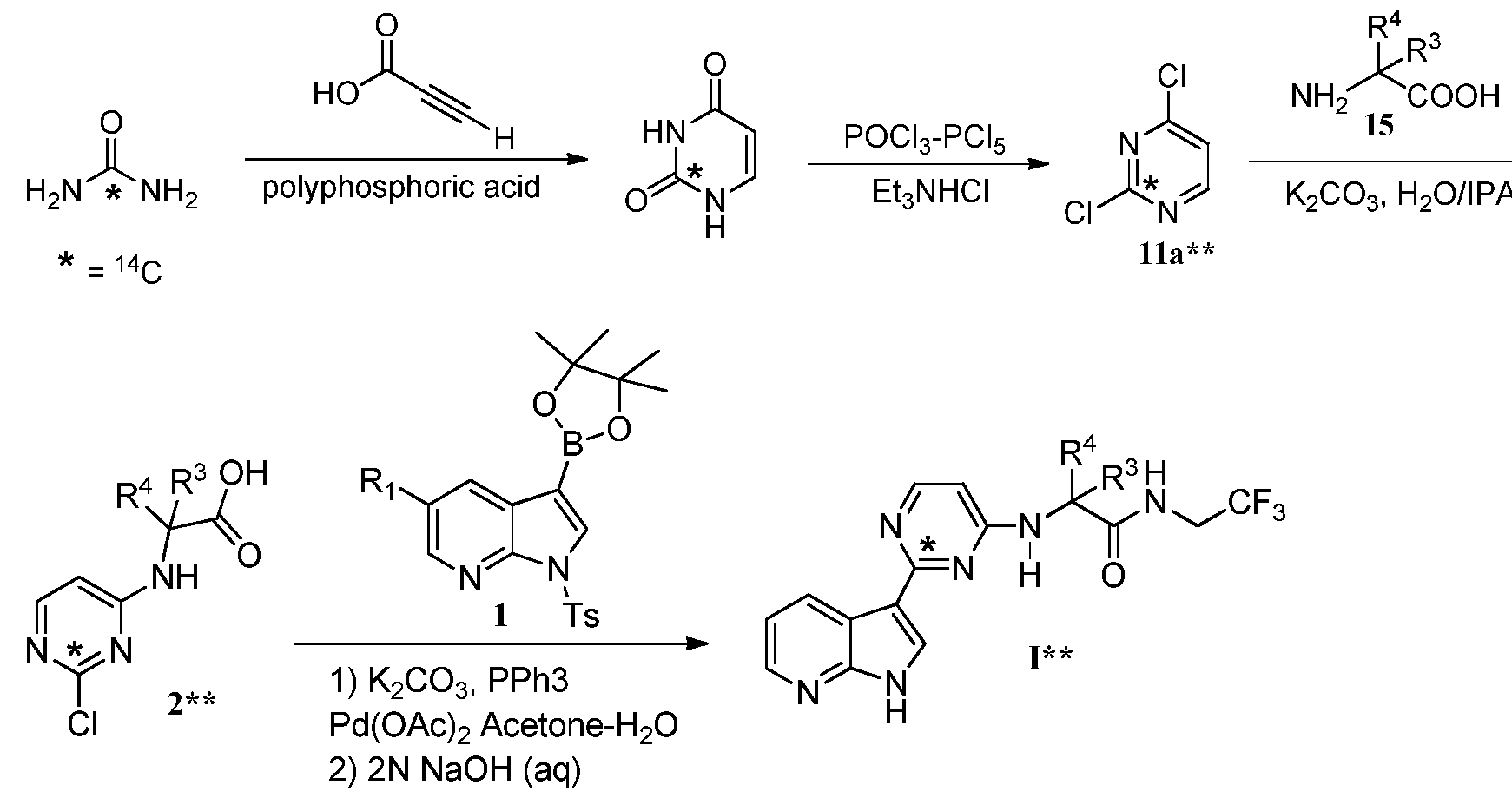 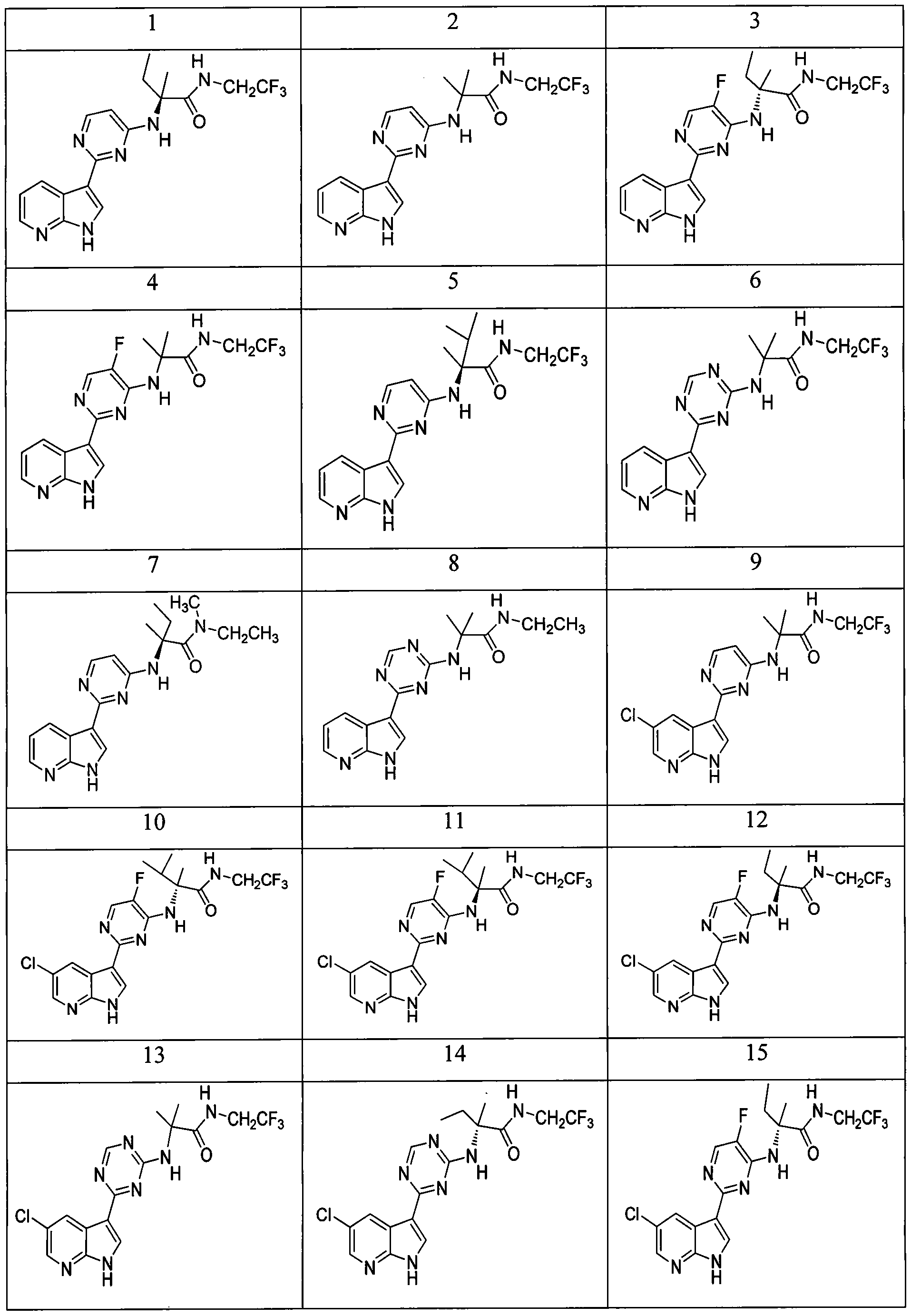 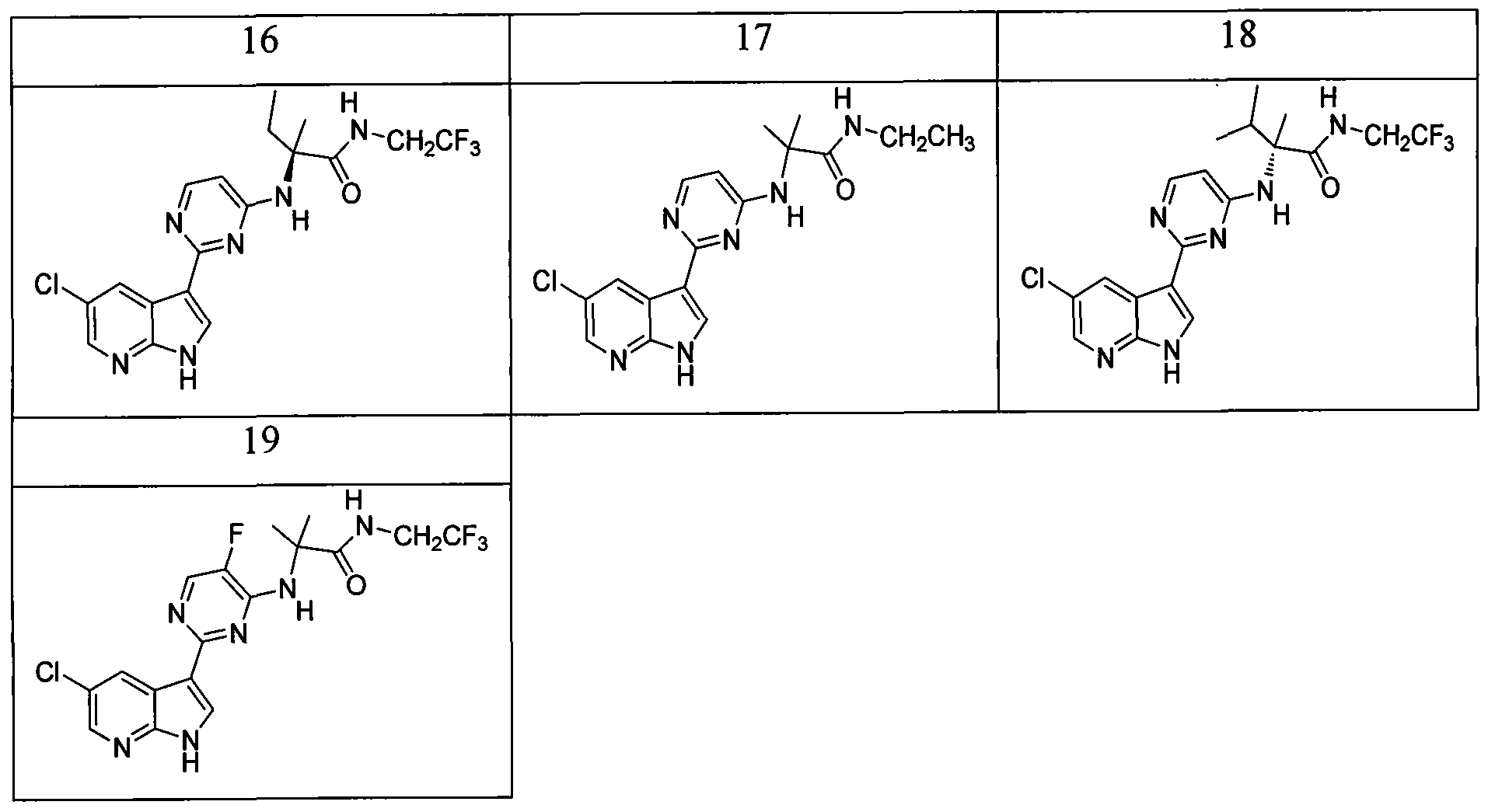 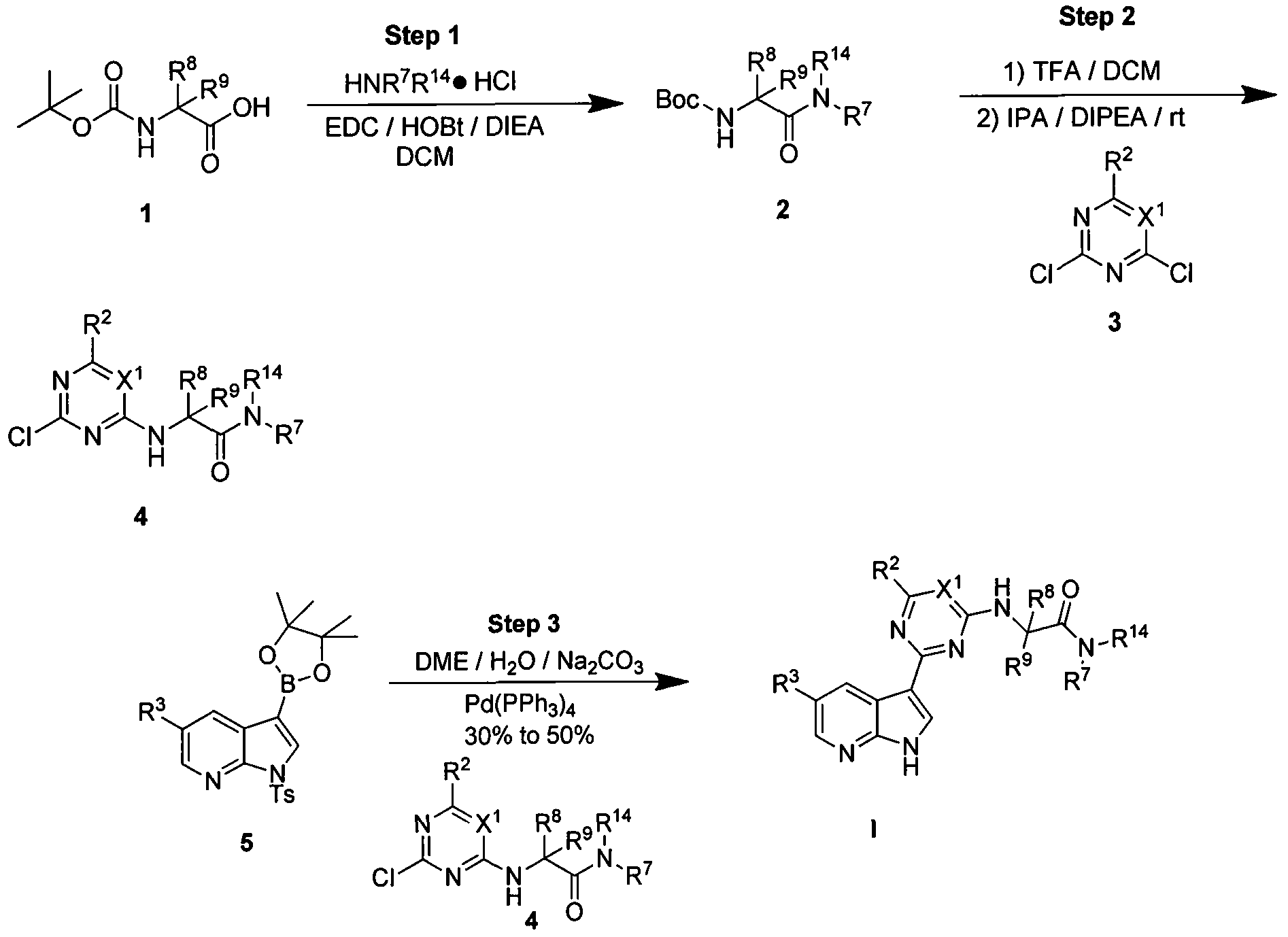 Example 1 Preparation of Compounds of the Invention
General Synthetic Scheme

Posted by DRUG PATENTS INTERNATIONAL at 16:34 No comments:

MY BLOGS ON MED CHEM

Read all about Organic Spectroscopy on ORGANIC SPECTROSCOPY INTERNATIONAL

Join me on Linkedin

Join me on google plus

Join me-Do not miss me

join me on Researchgate

join me on google plus